Latest Recipes Straight To Your Inbox Join on Facebook
↑

Home » Cooking Tips & Tricks » What Is Half-And-Half? + Substitute
We are a participant in the Amazon Services LLC Associates Program, an affiliate advertising program designed to provide a means for us to earn fees by linking to Amazon.com and affiliated sites

You’ve likely been mixing this popular dairy staple in your morning coffee for years. But do you really know what half-and-half is? Let’s break down the basics and learn how you can make your own half-and-half substitute within minutes!

It doesn’t matter how you like your wake-me-up whipped coffee in the morning. Or how cheesy thick you like your mac and cheese. With half-and-half, you can jumpstart your drinks and dishes from mundane to mhmm mhmm good. That can mean the difference between a grumpy morning and a mouthwatering creamy dinner.

Don’t cry over spilled milk. This guide will help you in finding the best half-and-half substitute to help you hit the ground running.

First Things First, What Is Half-And-Half?

Half-and-half is lusher than milk but less thick than heavy cream. 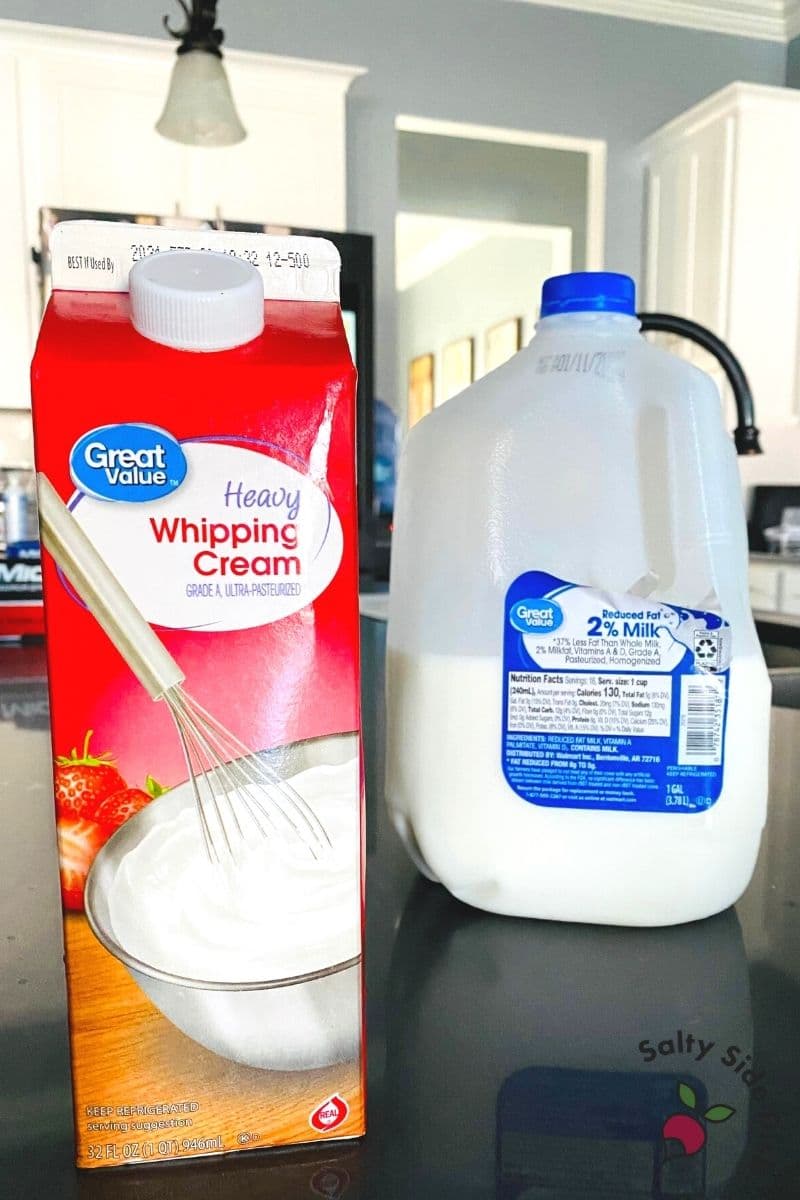 Half-and-half tastes like milk, but has a richer and creamier kick. Thus it has more flavor than milk but isn’t sweet. You probably wouldn’t want to drink half-and-half on its own. Instead, it is added to balance or enhance flavor in foods and drinks!

What Do You Use Half-And-Half For?

It is very difficult to make whipped cream with half-and-half due to the lower fat content. You’ll end up with a liquid no matter how hard you whip and mix. So no need to flex those kitchen muscles now. The same rule also applies to trying to use half-and-half to thicken sauces the way heavy and whipped cream holds structure well together.

With that said, half-and-half makes an excellent coffee creamer and there’s no wonder why it’s a key ingredient in coffee drinks. Aside from traditionally being used for coffee drinks, it can also be used for cold or hot teas. Most half-and-half users enjoy it for the perfect balance of richness.

You can also add half-and-half to:

Is Half-And-Half The Same As Coffee Creamer?

If you’re wondering, “what’s the difference between half-and-half and coffee creamer?” Simply, these two popular mixtures are not the same and cannot be used interchangeably.

Though they are similar in content and uses. What separates half-and-half from coffee creamer is dairy content!

Half-and-half contains half parts milk. While coffee creamer is made up of water, sugar, and vegetable oil with no trace of milk to be found in the ingredients. The fat content of coffee creamer (depending on the brand), generally is lower than half-and-half. 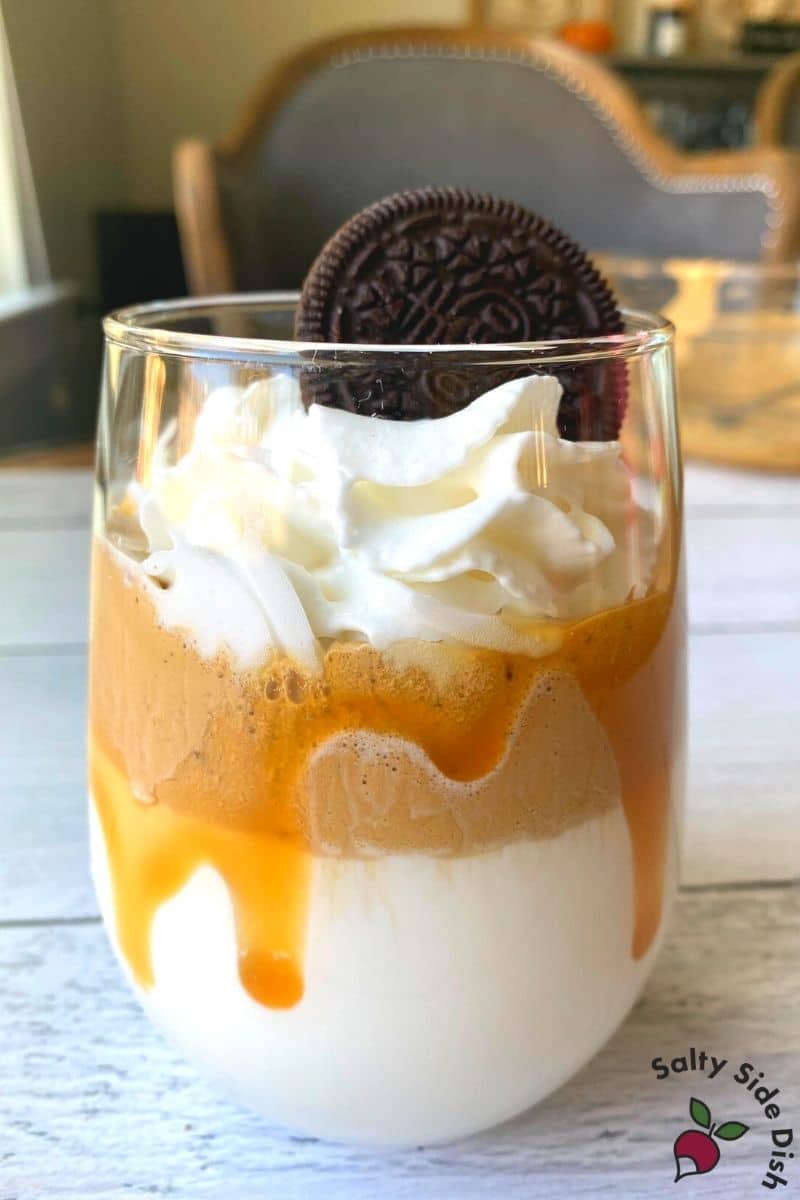 Unfortunately half-and-half is not keto-approved. Because half-and-half has 50% parts of milk, the lactose from milk comes in the form of sugar. This means an increase in more carbs and sugar – something to avoid when being on a keto diet. Plain half-and-half with no additives contains 0.7 grams of carbs for every tablespoon.

What Is Fat-Free Half-And-Half?

Don’t be deceived by the name “fat-free” half-and-half. Generally the fat-free version contains unhealthy additives to make up for the taste of a regular version of half-and-half. While the calories of fat-free half-and-half are fewer (by not much) than regular half-and-half, it’s what’s promoted to make you feel guilt-free at your grocery.

I recommend regular half-and-half to get the real deal in your drinks and cooking. Because life is too short to miss out on delicious and real food!

Is Half-And-Half The Same As Heavy Cream?

Half-and-half compared to heavy cream can seem like the same thing, but both dairy staples serve different purposes. It’s the milkfat content that distinguishes the two from one another.

What to cook with heavy cream:

Similar to why half-and-half and heavy cream differ, also lies the same difference that to of light cream. The fat content!

Light cream is perfect for recipes such as Blueberry Cake Donuts With Lemon Glaze or any recipe that calls for Creamed Corn.

You can also try adding light cream into:

How To Make Half-And-Half Substitute

Now you understand the basics, let’s learn how you can make your own half-and-half substitute!

If you find yourself out of half-and-half but don’t want to run to the grocery, making it is always your best bet. Because the mixture only contains two ingredients, how to make half-and-half substitute is super easy! Not only is it simple to make, but different variations exist and allow you the option to customize it to your taste!

Traditional recipe on how to make half-and-half substitute

For a creamier half-and-half substitute

Half-and-half substitute recipe with no cream

What Can You Cook With Half-And-Half?

Because half-and-half sits in the middle of the spectrum between whole milk and heavy cream, this makes the ingredient versatile for many recipes! Add a splash of half-and-half for flavor in your drinks, favorite sauces, or make creamier scrambled eggs!

Now that you understand what exactly half-and-half is, you’ll be able to enjoy your morning coffee and dishes with confidence. Don’t be afraid to add a kick of flavor for more richness.

What are other recipes you use half-and-half in your cooking?

I am always excited to learn about new recipes, so please share them below!

Latest Recipes Straight To Your Inbox Join on Facebook