Krispy Kreme Donut Bread Pudding became famous this year making the rounds as a viral TikTok recipe. Everyone was like….wha??? Donuts for bread pudding! But originally the recipe was started as far back as Southern culture begins and with one of the most famous kitchen connoisseurs of all – Paula Deen.

No matter how this deliciously sweet and satisfying breakfast casserole came to exist, we are so glad it does.

Uber sweet donuts from Krispy Kreme piled up in a casserole and topped with either syrup or Nutella (as we did) is enough to make your sweet tooth holler in joy.

For this sweet breakfast casserole bread pudding, you only need 1 dozen Krispy Kreme donuts, cut down into about 8 pieces a piece. Krispy Kreme regular donuts have a nice sugary shell around them that is amazing in this recipe.

And while I adore super and sweet breakfasts like this, if you want balance the morning with some savory, try Sausage Hash Brown Casserole and a side of slow cooker grits. It’s a trifecta for a perfect buffet breakfast.

This entire recipe can be loaded in its entirety below on the easy to follow printable recipe card.

Why Donuts for Bread Pudding?

The type of bread that you add into a bread putting recipe can really change the whole flavor of the dish. Classic Southern Bread Pudding, for example, is more of a traditional old fashioned recipe that incorporates raisins, just like grandma would make. This apple cinnamon bread pudding, however, already has some of that sweet cinnamon built right in making a soft and sweeter base for the custard glaze.

There really is no *wrong* way to make the bread pudding because at the end of the day its about finding a recipe that works for your needs at the time.

Using donuts is an excellent way to enjoy a sweet breakfast and donuts come in so many flavors that might go great – like (non-iced versions) blueberry, lemon and red velvet as well!

How to make Donut Bread Pudding

Bread pudding is mainly a two part process- creating the egg base that the bread bakes in and prepping the bread you are using – or in this case, donuts.

Taking a dozen classic Krispy Kreme donuts, cut each donut down in 8 pieces (try not to eat too many – its tempting, I know). Layer all the pieces into a casserole dish.

All bread pudding recipes (and usually most breakfast casseroles as well) need an egg base. This usually consists of a dairy and eggs that are poured into the bread.

Once donuts are in the dish and egg mixture is made, pour into the dish on top of the donuts. Using a spatula, gently press donuts into the egg and cream mixture, allowing them to soak up the liquid. Let the entire dish set for about 10 minutes.

Preheat oven to 350 and bake for 40-45 minutes or until knife stuck into the center comes out clean of liquid.

Remove from oven and let bread pudding stand for 5 minutes.

To be honest, this TikTok bread pudding can be served topping free. It has plenty of crispy bits of sugar and sweet donut that on its own is great.

If serving with Nutella: Heat Nutella in a microwave safe bowl for 15 seconds, stir. Return to microwave, heating in 15 second increments and stirring until runny (about 45 seconds total heating time). Drizzle on top of donut and serve warm

Of course this Krispy Kreme breakfast casserole isn’t the only way to enjoy a great breakfast. 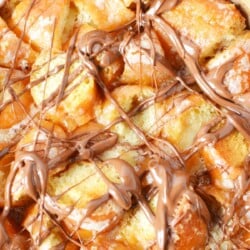 Author: Trisha Haas - Salty Side Dish
5 from 5 votes
Prep Time 20 mins
Cook Time 45 mins
Total Time 1 hr 15 mins
Servings: 10
Print Recipe Pin Recipe Rate Recipe
Viral Krispy Kreme bread pudding (also known as Krispy Kreme breakfast casserole) is a TikTok Trend that brings the sweetness and sugary goodness of a donut to the old fashioned and classic taste of a bread pudding recipe. Bread pudding is aptly called bread pudding because it combines a bread source (in this case donuts as the bread), cream and eggs. However, this recipe is just as much a Donut Breakfast Casserole and is even more satisfying than French Toast Breakfast Casserole. And with so many flavored donuts out there available, once you have mastered the original Krispy Kreme Bread Pudding (breakfast casserole) recipe, its fine to mix it up and try with other kinds. Plus, day old donuts work great because they are re-softened in the oven with all of the cream. Left over donuts just transform into perfection. Imagine the kids faces when they see that you made an entire breakfast from donuts! This may not be grandmas bread pudding but its a comfort food in the viral TikTok making and is truly the BEST bread pudding recipe ever. Smother with Nutella, chocolate, or caramel to really load up the sugary topping.

Can any kind/flavor of donut be used?

We have not tested this out with donuts that have frosting, which could affect how a donut absorbs liquid. Stick to cake style donuts with glaze (or not) like classic, blueberry, lemon, and red velvet.

What topping choices do you recommend?

As you can see, we like a chocolate drizzle and Nutella works perfectly. The bread pudding can also be served with pancake syrup on the side or a creamy custard. Other choices are caramel or strawberry topping.

How to store left over bread pudding

Left overs should be covered and added to the fridge for up to 2 days. Microwave at intervals until hot for serving. 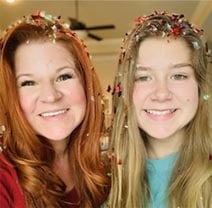