Home » Recipes » Dessert » Churros and Dipping Sauce
This website may contain affiliate links and advertising so that we can provide free recipes. Read the Privacy Policy.
Jump to Recipe

It’s so easy to whip up some churro dough and make homemade cinnamon and sugar churros . The crispy outside and chewy inside are perfect for creamy melty dipping chocolate and an addicting, delicious any time snack.

There is nothing in this world better than fried dough. Or really…fried anything.

All the greats come fried – chicken, potatoes, Oreos…you get me. The fried dough that formulates a churro is SO good and provides the perfect platform to roll in sugar or dip in chocolate (or both!).

Remember that when you make this dough it needs to be piped into fried as soon as its cool enough to handle. Dough that sits can break apart.

What are Churros Made From? Traditionally, Mexican churros are made with a dough called Choux, which has flour, sugar, and egg. In this quick and easy recipe, there is no egg.  I like the simplicity of this  eggless dough recipe with nearly the same outcome and these golden brown homemade churros are totally delicious.

This recipe makes 10 churros, which is enough to be 2 servings, but if you eat them like we do, I would say its a personal size churro recipe. This is a totally easy recipe for churros with chocolate sauce made out of nutella. 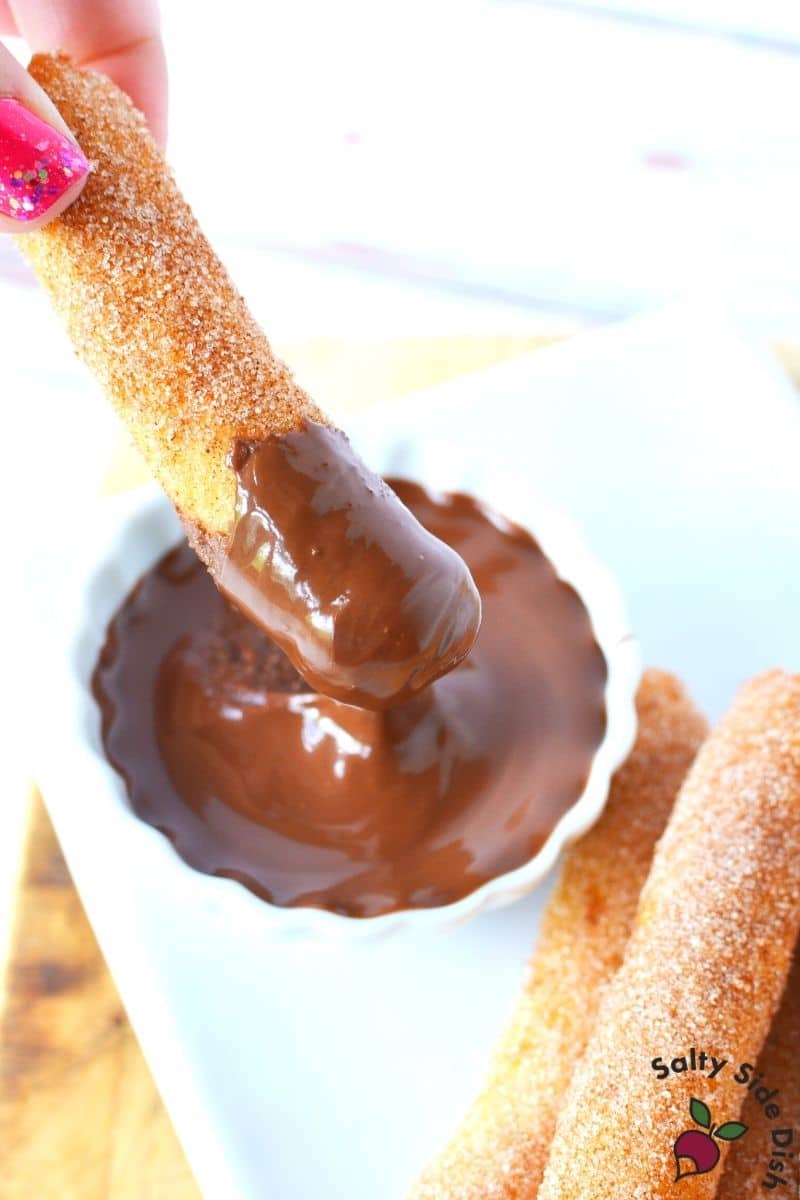 How to Pipe Churros

How to pipe Churros

– The dough can be quite thick to push through a star tip, so simply cut off a pastry bag end or use a thick zip lock baggie corner. The size hole you cut is the thickness of the churro. Some people like thin like “churro fries” and some like them a little thicker, which helps get more of the outside crunch but inside chew.

If you adjust your churro size smaller, just be mindful that it cooks faster and if you make it too large, the middle wont cook as fast as the outside.

For the first few churros, you may be adjusting your timing.   For the purposes of this recipe, the size of the churros are about a “cheese stick.” 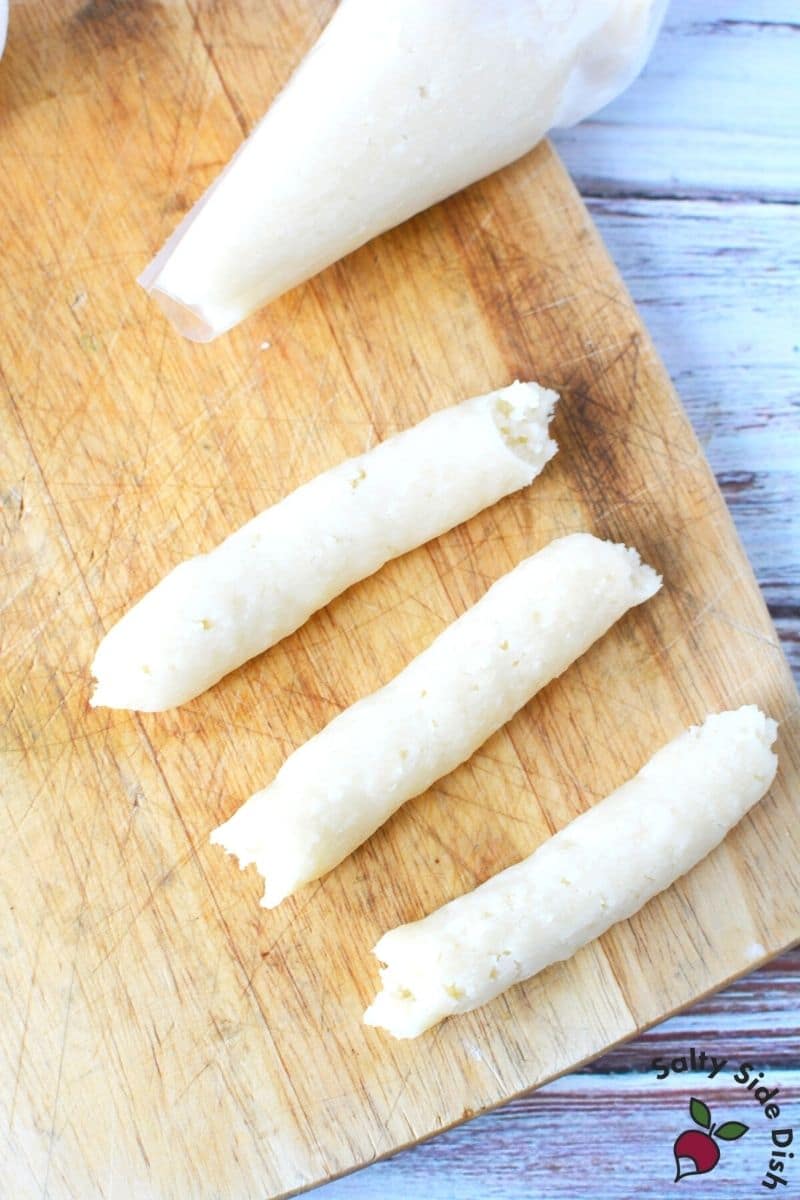 How to make Homemade Churros

Add water, sugar, salt and oil into a saucepan.

Bring to a boil. Remove from heat.

Stir in flour until a dough forms, but do not overmix. 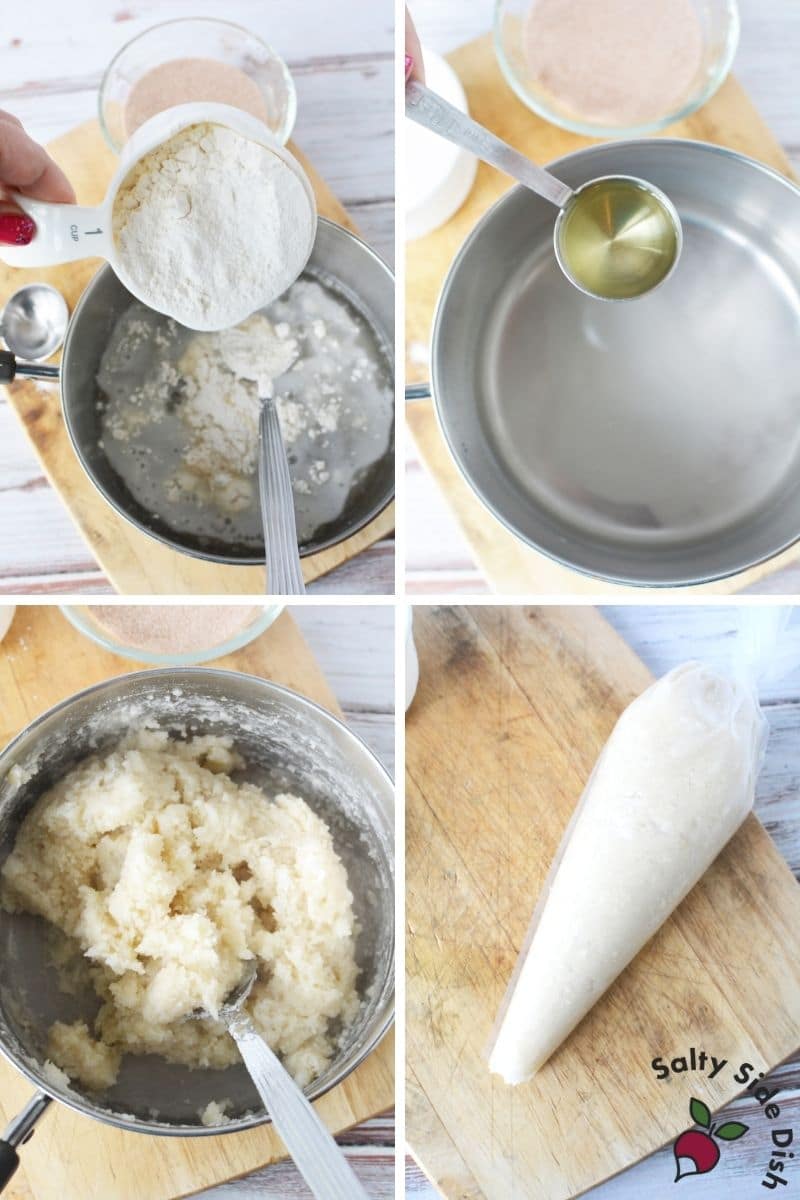 Let dough cool for just a few minutes so it’s easier to handle without burning yourself holding the piping bag, but still warm.

Heat vegetable oil in a skillet until hot. (I had about 2″ of oil in my pan)

Place dough into pastry bag and snip the tip so it’s about 1″ in diameter.

Pipe a 4-5″ strip of dough into hot oil or pipe on a cutting board and use tongs to carefully place into hot oil.

Fry 3-5 churros for 3-5 minutes, until browned on the outside. 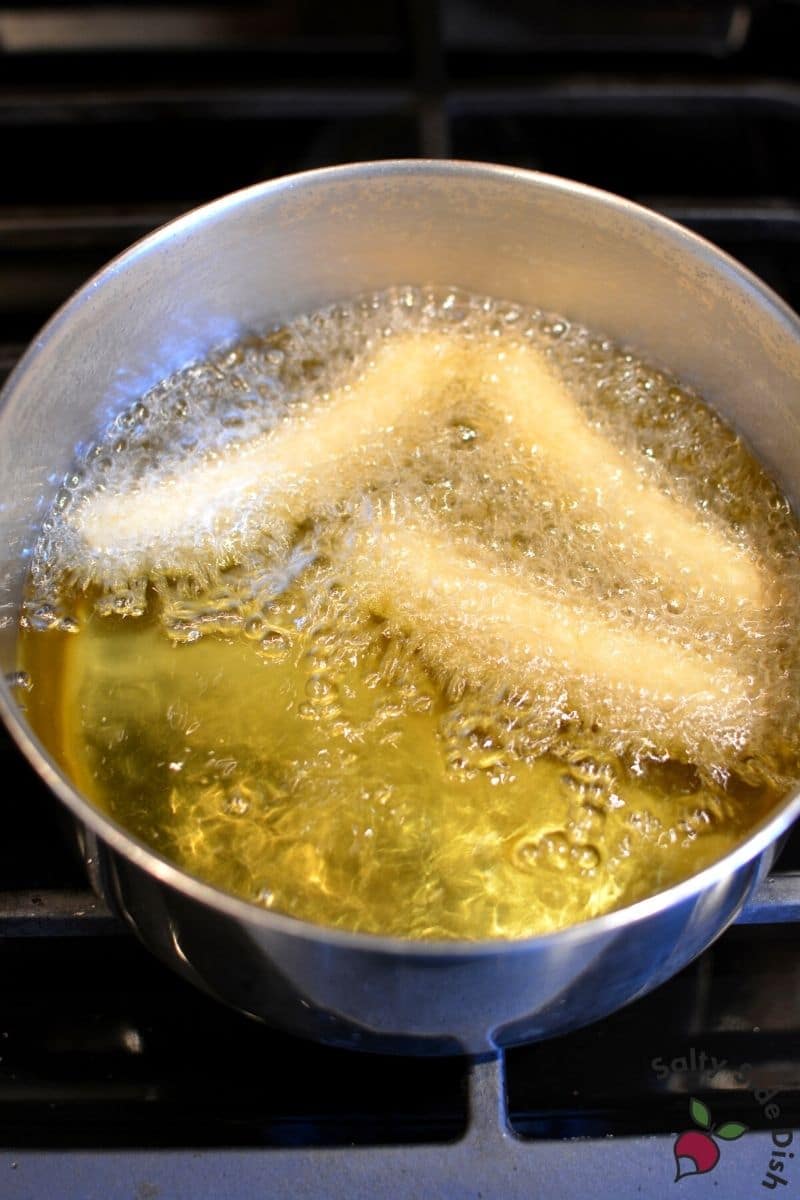 Repeat process until all dough is cooked.

Mix granulated sugar and cinnamon together and dredge churros into mixture, coating evenly. 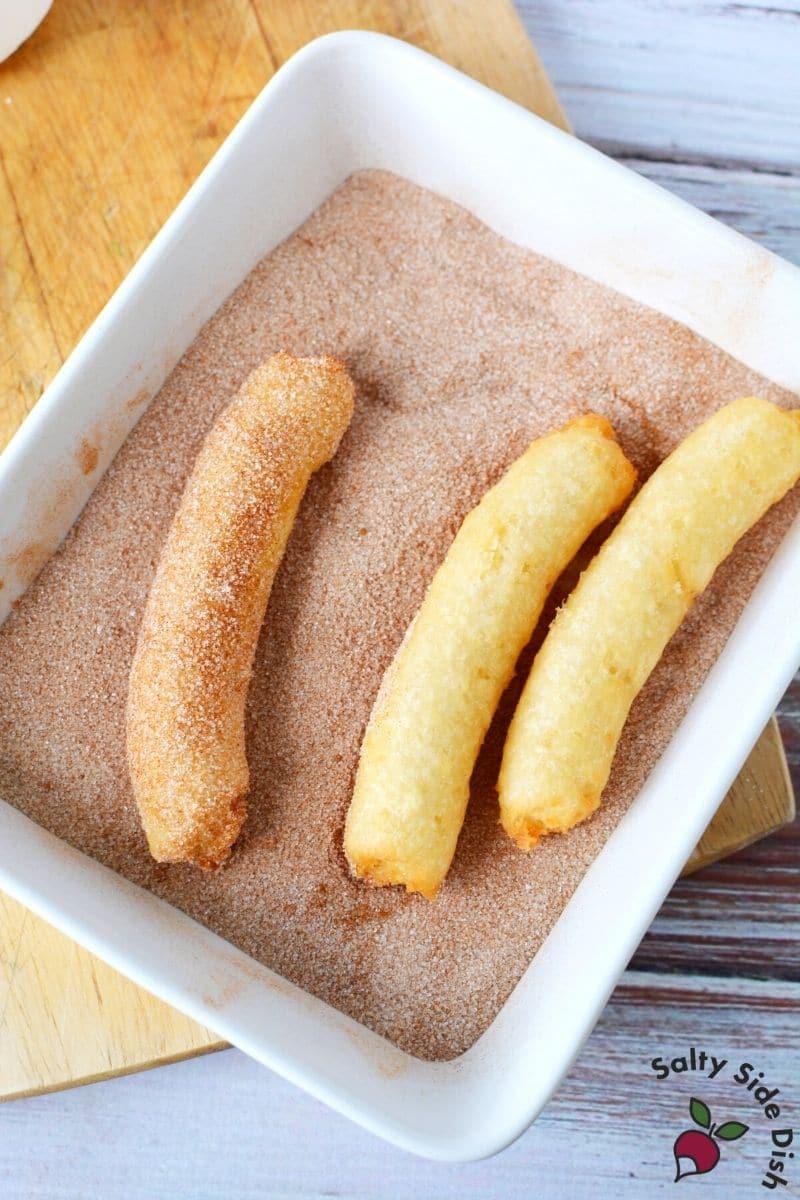 How to make Chocolate Sauce for Churros

Heat nutella (which turns into dipping sauce) in microwave for 10 seconds and stir.

The chocolate sauce we used is Nutella chocolate, spooned into a bowl, microwaved for 10 seconds and stirred. You can reheat the Nutella as needed while eating which is a perfect way to enjoy churros with chocolate dip. 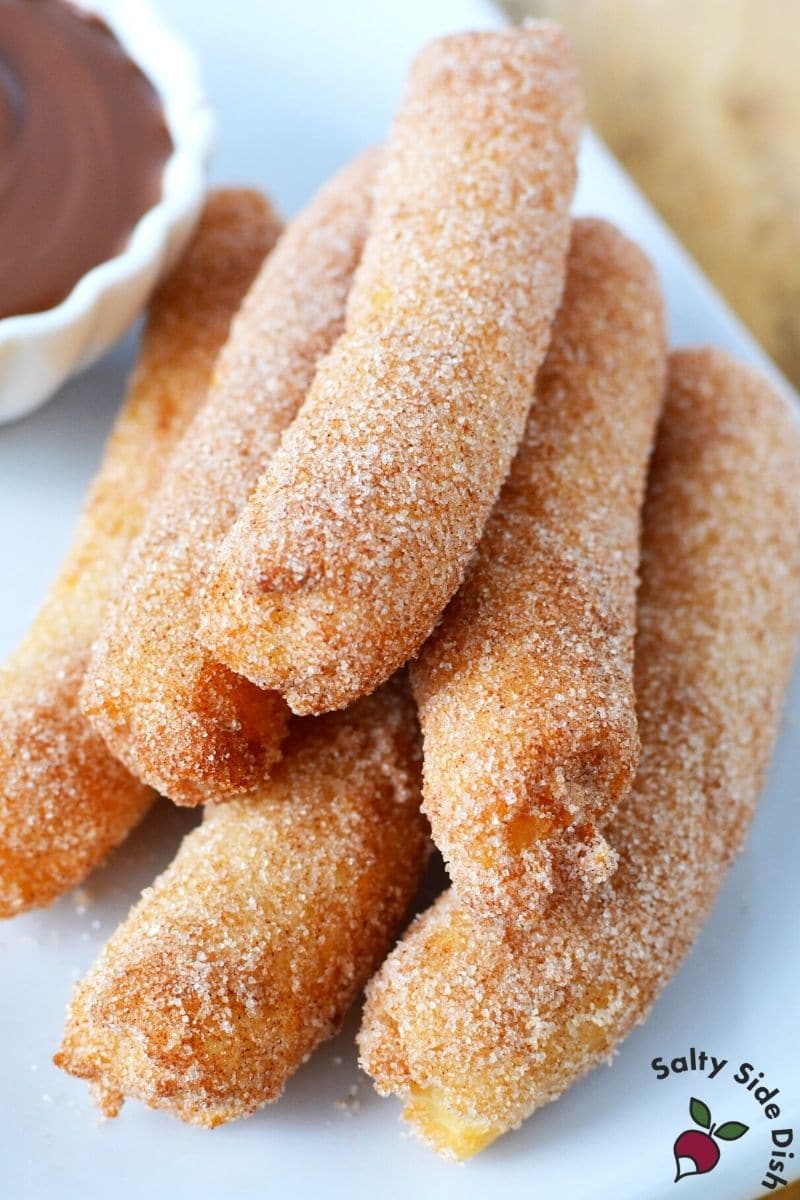 Where can you buy premade churros? Do not want to make your own churros?  Every brand makes them a bit different from crunchy to soft, but some fan favorites  are Taco Bell and Jack in the Box. Additionally, you can find frozen churros at local stores- OREO has a churro filled with cookie cream!

Can Vegans eat churros? Great question! Normal traditionally prepared churros with dessert dough are vegan. However, in this recipe, I use vegetable oil and its NOT vegan. To make the change to a vegan churro, simply change out the vegetable oil to a canola oil – so yes, Vegans can eat churros if properly prepared!

Are Churros Mexican? So many foods come from all over the world and are refined in other places. Churros (as far as we can tell) original from Spain however moved to Mexico, where they became a more modern day dessert.

How do you make a piping bag for churros? You can add a gallon size baggie into a glass and spread the opening around the rim. Add churro dough, then cut the corner of the baggie. Its also fine to just use a real piping bag and a tip!

Are churros bad for you? This is a debate I get in with all readers – is whatever recipe they are reading bad for them? I personally believe that most bad for you food comes from bad habits. Does this recipe have calories and sugar? Absolutely. But Churros, like all desserts, are fine as a dessert and not a daily consumed meal. So enjoy!

Do churros taste like Doughnuts? To me all dessert doughs typically take somewhat similar – doughnuts, churros, anything FRIED has the same sweet fried taste that comes from the oil. However they are a bit more dense and a little crispier than most doughnuts.

As always, if you test out this recipe and have feedback, made changes that are DELICIOUS, we want to hear from you! Leave a comment and let us know your changes, your dipping sauce ideas, or to troubleshoot if you had problems. We want every recipe to be perfection for you and love hearing from our readers! 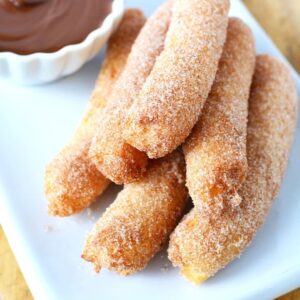 Author: Trisha Haas - Salty Side Dish
Super simple churro recipe with delicious dough that fries up and then coated with cinnamon and sugar and dipped in chocolate sauce. Simple eggless churro recipe, crunchy on the outside, chewy on the inside! There is nothing more delicious than a crunchy fried cinnamon sugar churro just coated in dripping melting chocolate. These sweet Mexican desserts are so easy to make at home and this is just one of many different ways to easily recreate this fried favorite. Churros, like funnel cakes, remind me of the fair - filling, sugary and finger licking good. While this isn't an "original" Mexican version, these fried churros are still worth making and chowing down on. With this sweet fried pastry and a variety of delicious dipping choices, try churros for breakfast, as a snack or as a dessert.
5 from 1 votes
Print Recipe Pin Recipe
Prep Time 15 mins
Cook Time 20 mins
Total Time 35 mins
Course Dessert
Cuisine Mexican
Servings 10 churros
Calories 103 kcal 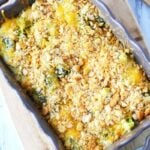 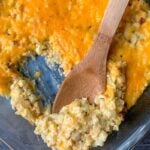 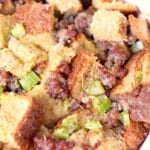